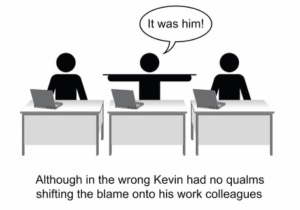 Will You Please Train Me?

There were 20 people in the room for the training on the new time card software. “You put your finger here and it clocks you in,” the trainer said. “Now let’s go over all the exceptions and frequently asked questions about the system.” At the end of the two-hour class everyone went back to work. Three months later the new time card system went live and most people forgot what they learned in the training. Participants in the training had not used the learning until the system went live. Payroll was delayed and everyone was mad.

Get Off the Blame Chain Train!

The Information Technology Department blamed Human Resources for planning the training too far ahead of actual use of the system. Human Resources blamed Administration for taking too long to decide when to implement the contract with the vendor. Administration blamed finance for not sounding the alarm sooner about payroll being delayed.

In the middle of the blame game a hand went up. The Executive Director called on the employee who said “I’m less interested in who is to blame and more interested in when I can get trained on the system again. I have no clue what this blaming conversation is accomplishing. Will you please train me? I want to get paid. The fact is, I don’t remember what I learned.”

The silence was deafening. She continued, “If you need someone to own the coordination of the refresher training I’ll do it. I’d like to be trained to train others on the system.”

The ownership approach to the blame game is a great way to stop it. Jump in and own something! Do you really care who is to blame? If you don’t jam a lever in the flywheel that is spinning off all the dumb, time wasting finger pointing and say “I’ll own moving this forward by taking something on,” you are part of the problem.

You might be thinking, “Why should I? The folks making the big bucks need to stop yapping and get going.” If you can play a part in making that happen do it. What are they going to say? “No, we don’t want anything to move forward we just want to be mad and blame each other!” Well, we know how that turns out.

The No Blame Train is Leaving the Station

If the blame train is how your organization works, I am begging you to start looking for a new job, they don’t deserve you and you deserve better; much, much better. And, much better is out there. Polish your resume, list those times that you stepped in to stop the blame chain game (this list is worth its weight in gold in an interview) and above all think more of yourself. Don’t settle.

It’s annoying, demeaning, even ridiculous to consider how much time is wasted when the purpose of a meeting devolves into blaming or shaming. If you are sitting there, do something, interrupt it, take ownership. Once everyone is over their shock and awe you’ll notice that they’ll start running alongside your productivity train and attempt to hop on. If not, be sure to take a mental health break and recalibrate your own direction. It’s better to be left at the blame train station than to hop on and go where losers go.